I guess it is in the nature of humans to die. That could be a way to explain why suddenly the largest selling artist of all time, bar NONE, has suddenly departed from his Neverland to the real Neverland. As I turned on CNN this morning, I saw Larry King’s ageless face talking about “Remembering Michael Jackson”. It didn’t hit me at first… dismissing it as publicity for MJ’s upcoming “retour”.

Larry: “On the line we have Donna Summers, a close friend of Michael’s… Donna, what are you feeling right now?”

Donna: “Larry… I am shocked. There is a sense of tremendous loss….”

As the tea grew cold, I saw, unmovingly, Michael Jackson’s dead body being airlifted to the coroner’s office in LA… and I realized that this is weird. I mean, Michael Jackson is one of those “things” that is always there. Sure, he has been reduced to a pathetic caricature by the media wolves – but he is quite simply an inextricable part of this world that I inhabit. Now you’re telling me he is dead? Get outta here…

It was 1983 and I was 6 years old when my teenage cousins introduced me to some really strange music. My ears, hitherto accustomed to the strains of M.S. Subhalakshmi and classic bollywood music, could not decipher what was playing on the stereo. But, at the same time, I felt strangely uplifted by the catchy beats of Billy Jean. This man who sounded like a woman, but not really, with shrieks and loud satanic “Uh!”s and “Oonh!”s – had me mesmerized in no time. That was my first foray into Western popular music. We didn’t have a tape deck at home at that point, so I found myself requesting MJ to be played whenever we visit my cousins – swaying and jumping to the extremely catchy beats of Thriller.

That was 26 years ago. And even now – whenever I pop my special edition Thriller  CD into the player – I still sway and sing along. There aren’t many albums in the world which are timeless – Thriller is better and bigger than all those which are. From the mock-serious-horror of the title track, to the sheer cheese of “The Girl Is Mine”, the hissing spitting bet-you-will-dance catchiness of “Wanna be starting something”, the in-your-face rebelliousness of “Beat it”, the beautiful dance of emotions in “Billy Jean”, the tongue-in-cheek naughtiness of “PYT” and the goose-pimple inducing delicateness of my personal all-time favorite “Human Nature” – Thriller is a 9 track redefinition of pop music, the start of an era. An era that has ended today with the untimely death of Michael Jackson.

Sure enough, with a behemoth like Thriller behind him, Michael could never really create anything as phenomenal… although both Bad and Dangerous sold many, many millions of copies – cementing his status as the King of Pop. But behind the success, was a child who never had a childhood. Later, under the glare of the media attention – there were stories of how Michael and his siblings were abused and pushed relentlessly by their father towards stardom. This made Michael into a different kind of person in many ways – and I only know him

through his music. He was an extremely vulnerable man. He had no idea how to deal with the trappings of the fame and fortune. He questioned his relationships, his motives, the world around him. He sang of child abuse (in Smooth Criminal) and in a cruel twist of fate was accused of the same. He sang of destruction of innocence. He sang about the destruction of the earth. He sang of poverty and oppression. And all through it he displayed a kind of musical brilliance and virtuosity that the world will never see again.

As the years went by, troubled by the allegations, health problems and the constant media mockery – he retreated into a shell and he became the world’s favorite whipping boy. And yet his albums continued to sell. Millions and millions of them. Tribute remixes of his classics topped charts. He still played on the radios, in pubs, discos, cars, homes, ipods. Soon Michael the cartoon character was dead to the world – but Michael, the King of Pop, the supremely talented musician of our times, lived on in our CD players. His videos and recordings of live performances are still the benchmark for an artist who was not just a voice, but a force in the world of entertainment.

Maybe this is why I saw a kind of evenness in the voices of his fans, his friends on the TV today. Maybe this is why I feel a sort of righteous relief. His physical form was already dead in our minds. Michael Jackson has merely left a world which chose to make him pay for his success. He has merely bid goodbye to those people who could never understand him and thought that money compensated for a childhood of abuse and lost innocence. His real life is still very much alive… and always will be in his music.

We love you Michael – and hope that you find the beautiful childhood that you were denied, wherever you are now.

One of my favorite commercials on television is the one where a father and son are walking by a line of shops with the father not letting the kid gaze at toys in shop windows, when suddenly the father himself finds himself affixed in front a Fiat showroom. Gazing at something beautiful… the Linea.

The Linea, has been Fiat’s fastest selling car in India (atleast in recent times) – and for good reason. There is quite simply nothing like it on Indian roads. In other words – it stands out. And everytime you see its dynamic curves, you find something new about it. The sweeping A-pillar, the hawk like stance, the high rear end… it is Italian styling at its zenith. Well almost.

Enter the Fiat Grande Punto. The auto enthusiasts in India have been waiting for the car for years now… and finally today, the official release statement came in. And frankly blew me apart. It is the most understated, yet eye-poppingly beautiful cars I have ever seen – especially on Indian roads. There is nothing special about the design… just the way it all comes together like a Neruda verse, or the strokes of Da Vinci. Poetry.

And the best part? 3.99 Lakhs (399000) – starting. Want to spend more? No problems… goes all the way up to 6.11. Superb pricing if you ask me, and will redefine the overcrowded mid-sized hatchback market. More importantly, for the first time, the Swift has competition in terms of value for money, looks and performance.

Here are some views… but the real beauty will only dawn on seeing it for real.

Now only if Fiat can assure its prospective buyers that all service related issues will be solved… this car will surely rock. And  Indian roads will start looking beautiful again… Can’t wait to test drive this one!

JJ Abrams is a genius.

A bit of a maverick… but yeah… genius. The creator of path breaking TV shows such as Lost, Alias and the new show, Fringe has made a name for himself as someone who pushes the envelope of what can be shown on screen. He saved the Mission Impossible series from becoming a regular action staple, by infusing an edgy, personal feel to M.I.-III. – and that was the only movie he had directed before he was chosen to helm Star Trek.

I guess one has to be a bit crazy in the head to take up something as revered as Star Trek. I vividly remember huddling with wide-eyed-wonder and cup-of-bournvita in front of the telly, trying to wrap my limited imagination around the “very very big spaceship” on the screen and the stupendous adventures of its crew. For those 45 min + nirma advertisements, Doordarshan redeemed itself a thousand times over in this child’s eyes. And I am sure a million others. Atleast, in me, it managed to kick start a fascination for technology and adventure, which I carry to this day.

Then it would come as no surprise that I was literally bristling with excitement when I heard that the Starship Enterprise would fly across for the first time, across the big screen. (OK – that’s not true, there have been movies before. But this would be the first big studio production.) A feeling greatly amplified when I realized that Dee knew what a Vulcan salute was. (What are the odds… I found a girl who likes Star Trek. I shall definitely live long and prosper.) So at warp speed, I booked two tickets to a preview show for a full day before it hit theaters officially.

The movie starts with Captain Kirk Sr. giving up his life to save the lives of his crew, while his pregnant wife heaved and pushed baby James out in a space-dingy. Baby James grows up a rebel, but with the reflexes and risk-taking attitude of his father. After a typical bar brawl where he beats some and gets beaten some… he is inducted into the Starfleet. Where he meets a precocious Vulcan prodigy, Spock. The rest I will not divulge, considering there might still be earthlings out there who haven’t boarded the USS Enterprise.

So how was the movie? As expected the movie was as awesome as it would

feel when Scotty would be beaming you into the depths of the Laurentian system – while moving at warp speed. (I can only guess, but what’s a man if he can’t dream…) There is non stop action and adventure, and black holes never looked so gorgeous before.

This isn’t a homage to a definitive and path-breaking TV series. This isn’t an attempt to pander to the whims and emotions of the gargantuan following that Star Trek has all over the world. It is to tell the rest of the world, the story of men and women who were dedicated to their job, were quick on their feet and loved kicking bad-alien-butt. But, most of all, the latest Silver Screen rendition of Star Trek introduces the formation of a friendship between two of the most unforgettable characters in history of television – James Tiberius Kirk and Spock. Much like Christopher Nolan revived the Batman franchisee with “Batman Begins” – JJ Abrams has successfully relaunched Star Trek. And with what style and panache! The cast is terrific with Zachary Quinto of “24” fame literally transforming his face and manners to match that of brilliant young Spock and Chris Pine  infusing a sense of latent greatness mixed with irresponsible genius, into a character who would become the greatest Starship commander of all time – James Kirk.

What about the die hard Trekkers? Wouldn’t they be alienated (pun intended)? Possibly – there have been angry retorts by Trekkers who believe 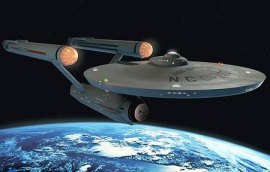 Abrams has destroyed Star Trek… by making it “accessible”. This just shows that Abrams succeeded in what he set out to do – tell a great story without getting stuck in history. Sure enough, when just before the end of the movie, the hulking USS Enterprise filled up the screen and the deep voiceover rang “Space. The final frontier….” – the hair stood up at the back of my neck and my skin resembled that of a monitor lizard. Bumpy.

Fan or not… watch this movie. Definitely the best movie that has been released in 2009. Now setting phasers to sequel….